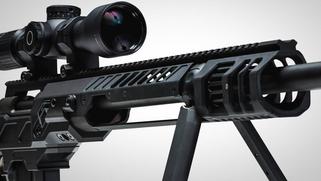 Posted at 17:30h in Uncategorized by NumoCreative 0 Comments
0 Likes
Share

It’s difficult to gauge exactly when the first bipod was created.

Early European <a href=”https://en.wikipedia.org/wiki/Hand_cannon” target=”_blank”><em>handgonne</em></a><em>–</em>based on Chinese designs<em>–</em>are seen in late 12<sup>th</sup> century manuscripts as rudimentary cast iron barrels laid at an angle on top of short poles. The invention of muskets and rifles brought improved performance but also needed support for their long, heavy barrels. Ultimately, it’s hard to say they improved accuracy, since these primitive weapons were largely only used for volley fire.

In the mid 19<sup>th</sup> century improvised two-legged supports started to appear on rifles, particularly as frontiersmen relied on precise accuracy when hunting buffalo and other wild game. <a href=”http://www.artcountrycanada.com/images/terpning-long%20shot.jpg” target=”_blank”>The Long Shot</a> by painter Howard Terpning, shows ingenious native American hunters using crossed arrows to create an improvised bipod. However, accuracy was still limited due to a small range of movement.

It wasn’t until the 20<sup>th</sup> century that bipods as we know them really entered wide use, on both bolt action and automatic rifles during the wars. Beginning with simple hinged legs bolted onto barrels, the technology slowly advanced until mid century, when extending legs began to appear, allowing shooters to adjust the positioning of the bipod on uneven surfaces, making it possible to keep your rifle stable, and still pick up and move it with relative ease.

One of the first companies to manufacture after-market bipods was Harris, and their initial design has remained mostly unchanged for over 6 decades. The introduction of lightweight materials allowed bipods to be lighter, and the advent of Weaver and Picatinny rails meant they could be attached and removed quickly–but they were still attachments, ultimately adding weight and bulk to the front of rifles.

The culmination of this process is the new BLK LBL bipod, integrating lightweight materials and a unique barrel-through design to take a true evolutionary step in the development of bipods. Ready to make some history?